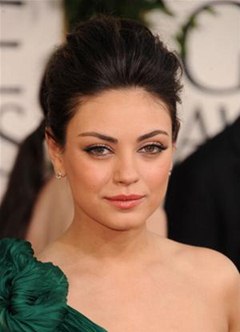 Despite losing to Melissa Leo last night for Best Supporting Actress in a Motion Picture, Mila Kunis couldn't have asked for more attention at the Golden Globes.

Mila sat in her wonderful emerald-green gown, while her Black Swan co-star Natalie Portman called her "Sweet Lips" in front of the whole Golden Globes crowd.  But her Vera Wang dress, even her nickname, wasn't anything compared to the attention she was getting for her Audrey Hepburn inspired makeup from makeup artist Tracey Levy.  The coral hues contrasted the cool tones of the dress perfectly. 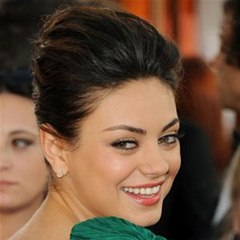 For Mila Kunis's Golden Globes look, Lancôme makeup artist Tracey Levy created a pretty palette to complement her emerald green dress.  For Mila's eyes, Tracey used Lancôme Color Design Five Pan Palette in Coral Crush and Color Design Five Pan Palette in Teal Fury (both out next month).  On her cheeks she used Blush Subtil in Sheer Amourose ($30), and for her lips she used L'Absolu Nu in Coral Ribbon, which will be out in March. 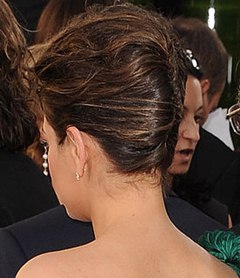 For her hair, Tresemmé celebrity stylist Mara Roszak gave Mila a French twist.  This updo style is elegant, but somewhat weighty for a young woman like Mila.  But it was simplicity and elegance Mila was shooting for, which worked out perfect.

Click through to read a written hairstyling guide for Mila's look.

But if you want to go the cheaper route for this sophisticated and fun french twist, and prefer a visual guide, Alessa from Pursebuzz is here to help you out.  It's very simple.  If you have curlers or a curling iron, you're set!

Want to master Microsoft Excel and take your work-from-home job prospects to the next level? Jump-start your career with our Premium A-to-Z Microsoft Excel Training Bundle from the new Gadget Hacks Shop and get lifetime access to more than 40 hours of Basic to Advanced instruction on functions, formula, tools, and more.

Other worthwhile deals to check out:

Join the Next Reality AR Community

Get the latest in AR — delivered straight to your inbox.